We spent 5 days last week at my parents' beautiful beach condo in Siesta Key (Sarasota) on the gulf coast of Florida. We spent most of our time at the beach and pool, and cruising around on my dad's boat - just generally relaxing. 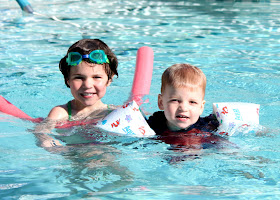 My parents have owned this condo for 6 years and spend about 3 months there each winter (they live in upstate New York the rest of the year). Last Fall they spent two months fully renovating almost the entire unit including reconfiguring the main living area to create a better floor plan for their purposes. Although they still have 2 bedrooms and 2 bathrooms, the place now feels so much larger even though they only widened the living room by 28 inches!!! This is proof that every inch counts in a small space!

Here's a quick tour of their renovated space!

Here's their kitchen which they renovated in the Fall of 2009. The horrible white '80s laminate cabinets and counters went out and these gorgeous cabinets went in with lots of glass fronts, Corian counters, and sandy backsplash. 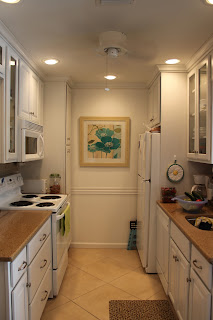 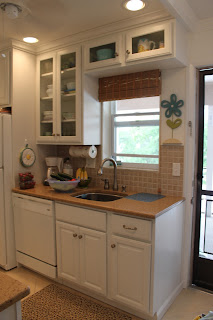 They also tore out the entire wall that made up the corner of the kitchen. There used to be a tiny pass-through to the dining area which was pretty much worthless. 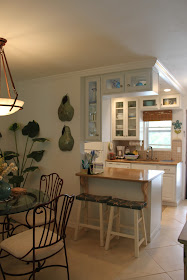 Here's the dining area which really doesn't get used all that much in favor of eating on the screened lanai! 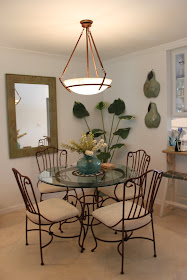 Here's the living area. The wall behind the two chairs on the left used to be 28" in and aligned with the wall on the immediate left. 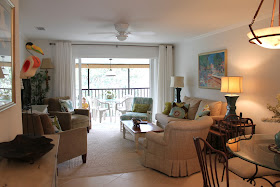 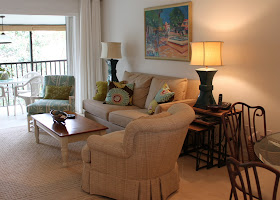 Here's the new wall which was pushed back 28". Before the renovation, the master bedroom had a wall of closets. They sacrificed those but found room for a walk-in closet where a useless hallway used to be. 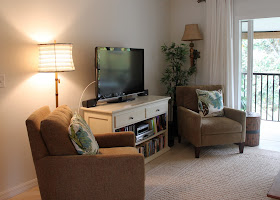 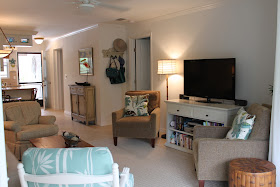 My mom is as great decorator with most of her finds from yard sales, thrift stores, and other deeply discounted furniture and accessories.

My craft mom decoupaged starfish from a wallpaper border on these stools which she got at the Salvation Army store. I love them! 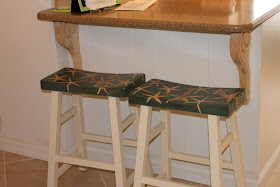 Here's their master bedroom which is still plenty big enough for a kind sized bed, a large dresser and a another large storage piece which houses their printer and other stuff. 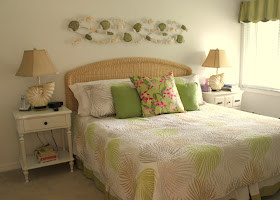 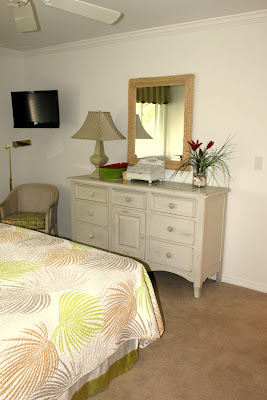 To give you an idea of what it looked like BEFORE, here are some old pictures that I had. No pictures of the old kitchen because I guess it wasn't worth photographing!


Here's another picture from another unit to give you a better idea of what they were dealing with when they bought it (minus the nasty old carpet).
My parents rent their place a few months per year. If you are interested click here. It's a 2 week minimum but believe me, you'll want to stay two weeks!
Melissa at HOUSEography
Share
‹
›
Home
View web version